This blog hasn’t been super personal. After all, I created the headline before I starting writing postings. Mostly, I’ve stayed within the mandate. I did do the fringe in Edmonton, but that’s been most of the activity outside of what I defined this blog to be.

So today marks the day that I’m crossing the line. Going into my personal life.

I’ve moved four times in the span of nine months, about a year an a half ago. I went from my parents place to Royal Oak, then back to my parents place. From there I moved to Crescent Heights and then to Beddington, where I am now. I was bouncing around a lot because the living situation didn’t pan out where I happened to be. I could have stayed at my parents house, but that wasn’t fitting as well either (in that whole, I wanted independence, wanted to be within the city kind of thing). Last February my best friends Jenn and Greg told me that they would rework their basement, and I could have a space to call mine. It’s small and I don’t have a door, but I have my own bathroom and my own space. It was going to be a deal for a year, and then we would reevaluate. Upon reevaluation, I’m just really happy here. I get to live permanently with my best friends. Being ridiculously extroverted, I like coming home to a full house. Even though most of the time, I’m not home. 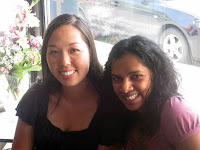 Jenn and I have been friends for years. We’re partners in grime, or PIGS for short. I’ve never met another person who thinks on the same plane as me. Two weeks ago, after undergoing major surgery to remove a mass attached to her ovary, Jenn has been diagnosed with cancer. She starts chemotherapy today. Aggressive chemotherapy, that comprises a lot of drugs and that will hit her body hard. 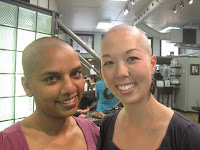 This story isn’t any different from anyone else who has fought cancer. But as a famous poet once said: “This is my voice, there are many like it, but this one is mine.”

The morning after we got the news, Jenn and I were chatting. ‘I think I’m going to shave my head with you,’ I told her. It’s kind of  big deal. I’ve never had short hair before. Always long. Always the same style. I’ve felt like my looks have been wrapped up in my hair. Whenever I go out, I make sure that my hair looks good. I feel, to a certain extent that my personal beauty is all about my hair.

There was a card on our kitchen table that someone gave to Jenn that read, ‘When was the last time you got to do something for the first time?’
Well that’s true, I thought as I passed it on my way to our appointment. Sometimes you just have to do something that scares you. Also, that’s what it says on the Lululemon reusable bags. And I’m sure they know what they are talking about.

We donated our hair to make wigs. The hair salon Fringe Hair, kindly took care of everything.
Needless to say, I bawled my face off. At first, it was because that was immediate reaction to cutting my hair. And then it turned into me crying about Jenn. It’s one thing to talk about cancer and chemotherapy and all of the consequences to it. It’s another to look in the mirror and your best friend without hair and know there is a long road ahead.

So there doesn’t seem to be anything else to do but face the world. Bald.

5 Responses to “Enough to keep you – Facing The World”