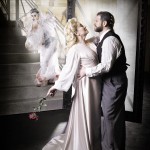 Calgary Opera opened Die Tote Stadt by Erich Wolfgang Korngold tonight, a Canadian premiere. Korngold won an Oscar for The Adventures of Robin Hood and it was the first time the award was given to a composer. Die Tote Stadt (The Dead City) tells the story of a man’s fight for his sanity as he […]