As previously mentioned a while ago, I love Jamie Oliver.
And he’s really big into making his own bread. And I’m not quite there yet. But I thought I would make my own pizza dough from scratch.
Oh and I would have people over.
Who are far more competent at baking than I am.
Good idea! 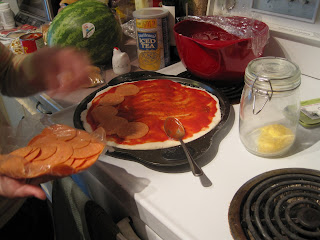 So I don’t have a link to the recipe because my roomate had it on her computer. But it was pretty close to this
It went pretty well. Baking things from scratch is a lot of work. And the dough actually needed more kneading that I thought. It was definitely a touch and go kind of deal. You always need to have flour. And it gets everywhere. I’m surprised I didn’t get it in my hair. Making dough from scratch is messy and kind of a labour of love. Seriously.

The recipe called for yellow cornmeal, and apparently that keeps it from sticking? I’m not sure. As previously mentioned I haven’t done this before. The actual baking of the pizza didn’t take long. Somewhere along the lines of 15-20 minutes, which was surprising to me. I thought it would take a lot longer. 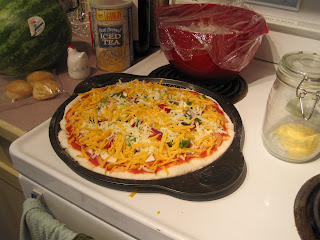 So this is a start. Browsing Jamie Oliver recipes for pizza he has a bunch featuring some strange things. Like fried egg. And lemon dressed rockets.

It really doesn’t have to be complicated. (I’m one to talk… cooking sometimes seems super complicated to me). But it would be nice to try so crazy off the wall things that not everyone can make you know? Pizza isn’t really one of them, but it’s nice to check it off my list.