The world’s greatest meatballs. I found them here.
It seems that this has got to be the greatest food ever, or she just takes really good pictures.
So Mandy and I got together to try this out. And I was dog sitting, so the dogs got to run around and play for four hours straight. It was a good time. 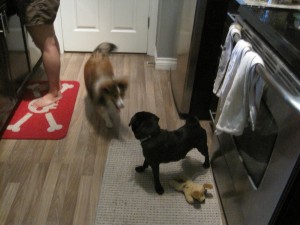 Mandy defrosted meat and did the meatballs. I don’t have any documentation of her labour, or any photos really, to show the making of the meatballs, so you’ll just have to trust me when I say there were meatballs, and they were good.
I went about making the marinara sauce. I chopped up onion and garlic to which Mandy remarked that it was no wonder I take so long to cook, because I make sure everything is done meticulously. Uhhh, I’m not like that, so that’s an odd compliment for me. 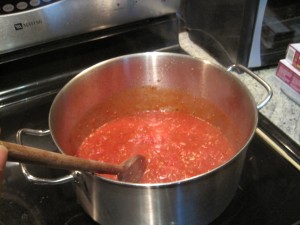 The recipe calls for about half an hour of simmering, but we used that as a guideline an only really did about fifteen minutes. There is always this debate I have when I try out pasta. I could go to Lina’s and pick up high quality, authentic Italian ingredients. Then perhaps my food will taste the same as in some of those fancy Italian restaurants. Or maybe it’s just the recipe. We put CO-OP bought tomato paste and a basic can of tomatoes to the test. Mandy says that she doesn’t have a distinct enough taste palette to notice the difference. I’m not sure if that’s true.We didn’t exactly measure in terms of oregano. I think the longer you simmer and let sit, the better the dish is. We were quite pleased with this recipe and I would probably say that these are awesome meatballs. Maybe next time I would use less oregano, or maybe MEASURE oregano. And cut down on the sugar and salt. But maybe then it just wouldn’t taste as good.
And I’m not sure I’m comfortable demoting world’s greatest meatballs to better than average meatballs.