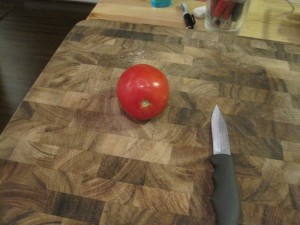 Heartland Cafe (used to have two locations, one in Kensington and one in Bridgeland, but now only the Bridgeland one exists) makes REALLY good Mac and Cheese. They managed to put tomatoes in it and it wasn’t sun dried tomatoes. So I’ve been on a mission to make a Mac & Cheese dish like it.

I tried once when I was housesitting and it was a disaster. I tried to bake breadcrumbs on it but they were too big and the whole thing was pretty bad.

But I then found Martha Stewart’s recipe. Yes, Martha Stewart.
Find it here.
It’s quite good. I’ve made it several times (I’m not sure if R. is sick of it yet) 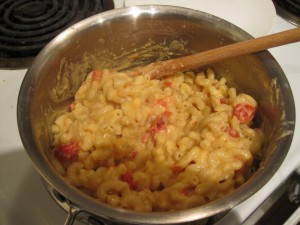 I like to make it pretty simple. No nutmeg, or anything like that.
Thicken with white flour. I find it great comfort food.
SO bad for you though. White pasta, cheese. I’m sure the tomatoes makes it a little more nutritious.

Now, the mission is to bake it, probably with breadcrumbs and I will feel satisfied in my quest to make Mac & Cheese.
I think.