CivicCamp 3D took place last Saturday. CivicCamp is a basically a collection of people from all occupations and places with one thing in common. They want to make Calgary a better city.
Whatever that means to you, better transportation, more access to community gardens, less traffic or a more open process of making decisions in Council. CivicCamp is less about membership and more about what we can get done together at a grassroots level, starting the conversation that spawns action. Non partisan, and leave your job at the door. You participate as a citizen. 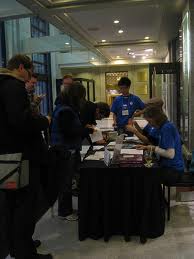 So after a late night on Friday I was trudging through the cold to the Central Public Library. Warmed with coffee I sat down to a couple sessions about what CivicCamp has done in the past. They covered the civic election and just an overview of past action.

Then after a short break the group broke off into separate action groups depending on what you were concerned about. Open data, community outreach, great public spaces. It’s all about making this city what you want it to be.

I think that Calgarians in particular feel pretty disconnected with their city and the recent elections was a real movement towards working to engage people to improve our city. A lot of those engagement opportunities were presented by CivicCamp as a lot of the aldermanic forums were initiated and hosted by CivicCamp. It’s mostly about starting the conversation. Start talking about what concerns you about this city and what you would like to change. Meet your neighbours. Participate!

On that note, the group focusing on Community Outreach was the one I participated in. They wanted to put their efforts towards meeting your neighbours. Though I support civil engagement, I’m moving yet again in about a month, so I’ll put effort into that one when I’m a more stable location.

I think this kind of involvement in the greater community is important and therefore I am thinking of hosting a discussion that deals with the CivicCamp questions: ” In the coming year, what do you think are the best opportunities to make Calgary a better place?”