So a fellow blogger had a potluck. A fellow blogger – as in Julie Van Rosendaal
If you don’t know who she is, she is the food and nutrition columnist on the Eye Opener on CBC Radio in the morning. But more importantly she has made a living doing what she loves, making food and talking about it and writing recipe books. I met her a couple months ago on Calgary’s first food crawl, organized by her.

So Julie decided she wanted to have a potluck. And she invited the internet.So I think about twenty five people gathered in her house in Ramsay. We met, brought food and had conversations in the kitchen. 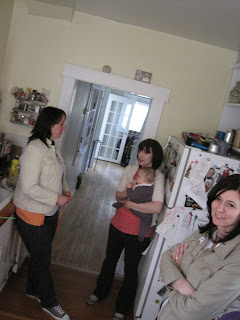 It was great to hang out in the sunshine, gather in a great community of the internet – no invitation required. I met some really interesting people and ate lots of food. 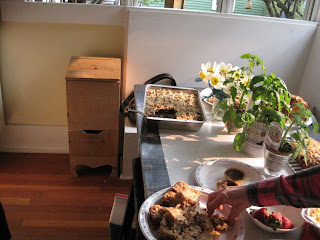 There were a lot of salads, and macaroni with bacon (!) and amazing bread and tasty cookies.

It was a great way to spend a Saturday afternoon. And if anyone can thrown a potluck, it’s Julie. It was incredibly brave of her to throw an invitation out there, into the abyss of the internet and hope that lovely people would show up at her door bearing dishes of wonderful things. 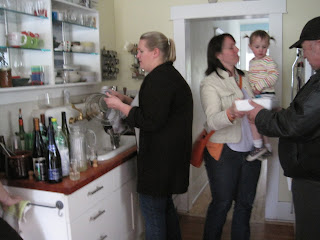 This is a picture of Julie, washing dishes next to the large supply of drinks. There was wine and beer and some amazing lemonade. Oh, and Prosecco. Prosecco is amazing. Seriously.