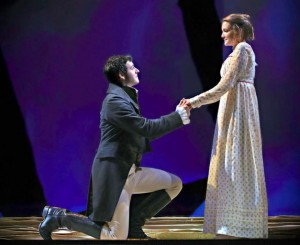 I attended Theatre Calgary’s Pride and Prejudice last night, late in the run. So this review doesn’t give much of a chance for you to catch the show, but I felt that I should put my thoughts down about the production.

I’ve seen a handful of productions of Pride and Prejudice, in film mostly. Haven’t read the book, but loved the BBC version with Colin Firth. This is my first stage production.

I’d go over the story, but honestly, that’s the hardest part of writing reviews for me, is summarizing the story in an interesting way. As well as making it succinct without giving everything away. So can I skip that part? I’ll provide an already written summary here! (The greatness about an ‘unofficial’ review is that I can link to Wikipedia. Yes, Wikipedia).

Firstly, Theatre Calgary’s casting for this play was quite good. Everyone fit their characters well and exhibited the characteristic’s of Austen’s descriptions. These are all very strong performances. Pierre Brault’s Mr. Collins is funny and quirky. He provides some great physical comedy. Tyrell Crews as Mr. Darcy is also quite brash and charming, as this famous character. Anna Cummer played the insufferable and irritating Caroline Bingley to a tee and I found myself disliking the character a lot (which is what you’re supposed to do). Allan Morgan as Mr. Bennet was quite great, the sturdy and reasonable man amongst the gaggle of women. Finally Shannon Taylor’s Elizabeth is fiery and passionate and lovely. The only things I have to say about the performances is that Gemma James-Smith’s voice is a little irritating at times and I think it’s because she naturally has a soft voice and has to project in such a large theatre.

Patrick Clark’s set design features large flowers framing the stage and is adequate for this production, but there isn’t anything that would blow you away in terms of innovation. Which is okay, as the power of the story and characters should be the focus of this play.  Clark’s costuming design is well done though, grounding the character’s in Austen’s time.

The great part of this production is the strong performances told in a compelling narrative that doesn’t have anything amiss in the package. It’s a lovely performance and if you’re a fan of Austen’s work, Theatre Calgary does it justice.