The past several weeks have been concert filled.
And I’m behind in posting about them.
Meagan Smith was in town. She came to play at the Ironwood, and her show was really great. 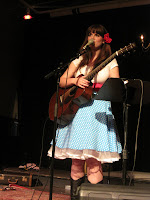 She won the Juno for best new artist. She is from  Nova Scotia.
I took my roommate, and we were close enough to touch her.
She played almost her entire album, and it was quite great in front of the giant crowd in the Ironwood.
Tickets were really cheap, at only 10 dollars each. And Meghan and her band had to run away from Vancouver because she was supposed to play the very night of the riots. So she had a ton of merchandise the night she played in Calgary.
Her visit was lovely and I highly recommend her when she comes back. 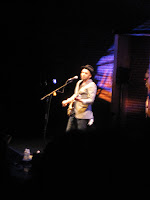 Hawksley Workman also came into town and played an acoustic concert at the GRAND Theatre. I’ve never seen him in concert before and boy can that guy talk. R and I went to see Arcade Fire last year and they barely said anything to the crowd. Hawkley didn’t ever stop talking. We were an hour and a half in and he had only completed nine songs. By his words he was screwed. His concert version of You and the candles was amazing and he forgot the words half way through and launched into a story mid verse. The beauty of the acoustic concert was that it was all about his voice and his guitar. And it totally amazed me that he could change any song to any octave and still sound great. It was quite great, complete with Hawsley sounding out the drum lines.