This post is a little late.
It’s about an event I went to, not last Thursday, but the Thursday previous to that.
But it was so interesting and so crazy, that I had to share it. 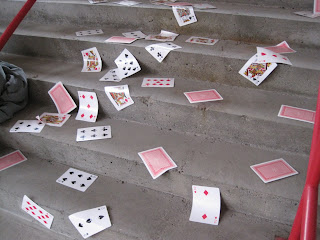 Anyway, this event the Subliminal Rabbit presents was an event that took place on First Thursday, but had nothing to do with first Thursday. My friend sent me the link to the Fast Forward article and I had heard about it on Twitter. Apparently, I was in for a short film. Okay. All I knew was that it was taking place in Victoria Station. And so we walked in to find this. 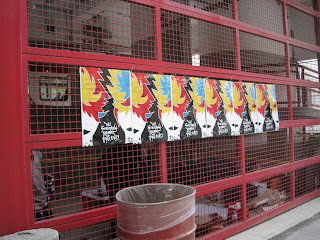 I wasn’t really going in with expectations, but I wasn’t expecting the event to take place IN the train. But the train wasn’t moving, and they were all decorated. The Subliminal Rabbit Presents had teamed up with Calgary Transit and they had stopped southbound trains. I guess. (I don’t think that trains could pass the immobile train at the station) 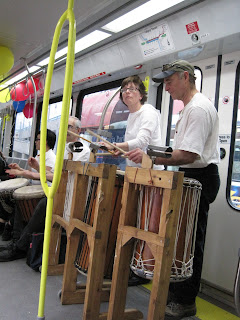 There was an admission fee. Which was worth paying for complete and total surprise. And honestly any group who can get something like this off the ground deserves my five dollars. They were serving pop, but they weren’t serving alcohol, which was probably a good idea, because getting a liquor license would be an almost impossible thing.

There were dancers, drumming, balloons, a guest sign in list and a bunch of people. I assume most people heard about it through Fast Forward and CJSW. There were probably people there who just happen to run across it. Like, what is going on??
I’m sure the lady in the train in the picture below was thinking just that. (you can see her! just squint!)

So music and drinks and dancers. How could you go wrong? I almost forgot about the whole point of why people were there. There was a short film. Right? Right. 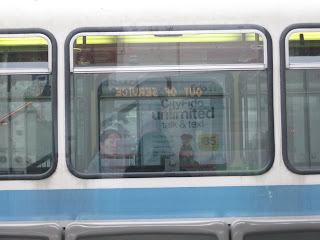 So about an hour and a half after the dancers stopped dancing and the music stopped, they dropped the curtain and had a projector and guys playing the music. This was the short film. I can’t actually say whether the film was good or not because I didn’t have a great view. That whole being short thing doesn’t usually work to my advantage. But I assumed that I would get a handout so I knew when it was going to open officially, or where is would be featured, or what film festival it would be in. 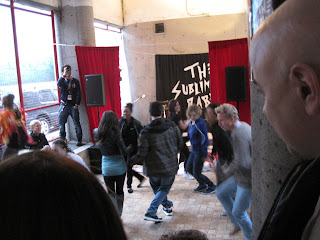 Unfortunately, it kind of closed up when it was done. Well, after the totally awesome dance party. People were just dancing. The DJs took over, playing music from the movie, and people just started dancing to it. It was great.
The whole event itself was quite great.
It engaged people, it was mysterious and just as importantly it tried to revitalize an area of Calgary that isn’t really a place to hang out. Victoria Park isn’t regarded as the City’s safest station.

I didn’t get any information about the movie or it’s screening, but I did leave with a little handout in my pocket. And that little handout leads to the Subliminal Rabbit’s blog. And that has all their publicity there.
Want to know more? Check out their blog here.