So I had my folks over for dinner.
On the menu? Guacamole and hummus as appetizers and Pad Thai for main.
I had bought avocados on Monday, anticipating that they would be ripe by the time Friday rolled around. Not so much. Total fail.
So I crushed them up best I could, and put them in the refrigerator. 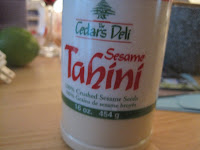 My roomates have a Vita-Mix, so it made making hummus really easy. (All hummus recipes are basically the same, so I didn’t link to the one I used) That being said, my mother made it, while I focused on Pad Thai. But side note to hummus. It tastes way better if you have Tahini. I could make tahini, I suppose, but that seems like a whole lot of time and effort I don’t really have. So I searched the grocery stores for it, and I DO mean stores plural. I went to Superstore and in that giant maze of stuff I couldn’t find it. So I went to CO-OP and thought I would have better luck. The first person I asked, asked me what Tahini was. SERIOUSLY? you work in a grocery store? It isn’t that freaken complicated. Nevertheless I was quite annoyed that help is hard to come by. It turns out that CO-OP gets their Tahini from Cedar’s Deli. In future, it might just be easier and cheaper to get it from there.

As for the Pad Thai, there were also some ingredients that I had never used before. Like tamarind concentrate. I used tamarind paste that I found at CO-OP. I used Julie’s recipe here. 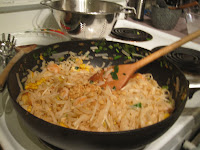 I bought the fatter rice noodles but was still disappointed to find that you still risk eye injury when breaking it apart. Picking up peanuts and bean sprouts was totally worth it. In the end, the dish was quite good. Like really good. Not as good as restaurant Pad Thai, but I think mine was healthier anyway. I started everything at 7, and wasn’t done until 9. So we weren’t eating until 9. How do people do it? Cook a large meal and have it be nice and all that, and eat at a reasonable hour??
I would totally make this again. Plus now I have all the ingredients in my fridge.

I’m not sure if you can tell from this photo, but the kitchen was a disaster. I put everything everywhere. Lots of clean up. Plus, my parents brought our dogs over. So three dogs in one space, one of which is like three thousand years old. I felt a little frenzied. But dinner was worth it. 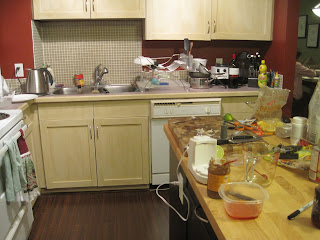 Next! Mandy and I are going to try the world’s best meatballs.

2 Responses to “Enough to keep you – Frenzied”