Back in May I had this ambition to be all supportive and urban and take part in a CSA (Community Supported Agriculture). My roommates and I and a couple other people have taken part. So since May, I’ve picked up a share of veggies and lugged them to my house where they have taken residence in my fridge. It cost me $140.

If my life wasn’t on fast forward as it is, this probably would have been an pretty good idea. Support a local farm. Get veggies and know where they come from and how they are harvested. A hundred mile diet – sort of. Except my life has been all over the place. With Jenn’s diagnosis, we’ve had very little time to actually use the veggies in our fridge. Lots of people have been dropping off meals, so our freezer is full, which is super nice. I’ve actually considered telling people, here is how you can help us: come over and cook our veggies. Seriously. 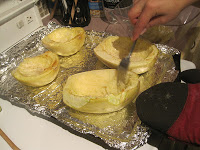 So though we had our hearts in the right place, taking part in a CSA has actually been a source of stress. Like when I come home from a play, after writing my review, I think about the swiss chard in my fridge that I’m sure is liquefying and I don’t actually know how to cook anyway. I’ve had plans to make potato salad for weeks, because our share has a lot of potatoes. And kale. If I don’t eat kale for another six months I think I’ll be good.

But between seeing 17 plays a week, and running a dance company and working for a politician and writing reviews and playing soccer – I simply don’t have the time to cook. Thanksgiving was a good time because I always had leftovers. Though I did get sick of turkey. 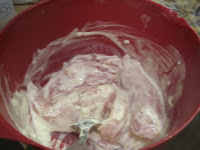 So I don’t have time to cook. But my roommate does. When she’s not feeling completely rotten. Yesterday was one of those days, and I was going to go on a conquest to explore how to make spaghetti squash, but we went for dinner instead. But tonight, Jenn made the spaghetti squash. And I took photos. And am writing about it. It’s a fair trade off right?

She used a recipe from a magazine so I’m googled it and found it here. 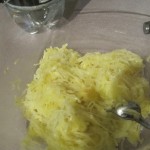 It’s probably a good thing that she made it because I didn’t actually know how to cook spaghetti squash. Turns out it’s not so difficult. We just threw together a simple tomato sauce and used it instead (leftover crushed tomatoes from the LAST time I made a meal). This was super tasty. There were no difficulties in making it, because I didn’t, in fact, make it. I should peruse the internet to find other recipes, now that I know how to cook it. While I’m at it, I should formulate another dream of potentially cooking the winter squash in our fridge. I didn’t even KNOW that it was called that. Had to google that too.

Also, I took a picture of the final product, but it doesn’t do the dish justice. So I’ll leave it to your imaginations.

I’m unsure as to whether I would personally be part of a CSA again. It’s a good deal I feel, but you really do have to be committed to cook at home. Which I don’t really have time for. Or at least I’m not willing to give up things to have time for it. But if you’re all ambitious and want to be the change you want to see in the world and not get e-coli and all that good stuff (!), and also are thinking hey! I have loads more time than Jenna could ever dream of… – Avenue Magazine did a really good outline of CSAs. Catch it here.